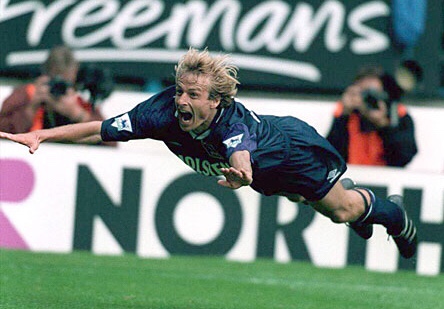 After a World Cup to remember, our bread and butter is back. The Premier League begins on Saturday so here’s a look at 6 of the best opening games from the 1990’s.

In August 1992, English football began a new chapter in its illustrious history. The FA Premier League had arrived, Sky had taken over the rights from ITV to show the games, and Arsenal had a cardboard crowd! No seriously Arsenal started the inaugural Premier League season with cardboard fans at one end of the ground. That summer, the North Bank terrace had been demolished to make way for a new all-seated stand, and a giant mural – popularly known as the ‘Highbury mural’ – was created to hide the construction site. The mural depicted thousands of supporters cheering for Arsenal. Watch the above clip if you didn’t know this, it has to be seen to be believed. Anyway, the 1991 league champions were one of the pre-season favourites for the title and looked to be proving the bookies right after leading 2-0 at half time, with goals from Steve Bould and Kevin Campbell. However Norwich did not seem to read the script, with two goals from substitute Mark Robins and an effort each from David Phillips and Ruel Fox condemning the Gunners to a home defeat. That result was the start of a fantastic season for Mike Walkers’ side, eventually finishing 3rd to achieve Norwich’s best ever position in the top flight.

Twelve months later Arsenal were at it again in more ways than one. This time the opposite end of Highbury was now under construction, thankfully without the laughable cardboard cheering fans from the season before. More important for Gunners fans though was another home defeat to kick off the season, this time to lowly Coventry. TalkSport presenter Micky Quinn didn’t have the most successful of careers – only playing 3 seasons out of 17 in the top flight – but this game is arguably the one he’s remembered the most for. The portly striker was often targeted by opposition fans with the chant ‘Who ate all the pies?’ but that afternoon he was mainly met with silence from the Arsenal crowd after a scoring a remarkable hat-trick to embarrass the hosts. Before the season began, Quinn had announced that he had backed himself at the bookies to score 30 Premier League goals in the season; he only added a further 5 to make a grand tally of 8. Ridiculously, following this match there were even rumours of Graham Taylor calling up the Sky Blues forward for England’s final World Cup qualifiers after some major injuries (can you imagine??). Luckily for us, Micky Quinn remained a player who was more likely to eat three lions than play for them.

Following on from the USA ’94, a huge star in world football signed for Tottenham, Jurgen Klinsmann. He was the first big name in the Premier League era to come from overseas and definitely helped attract other foreign players in the subsequent years to ply their trade in England. His opening match for Spurs has gone down as one of the great games of the 1990’s. Manager Ossie Ardiles started with a ludicrously offensive formation dubbed the ‘Famous Five’. A forward line of Klinsmann, Teddy Sheringham, Darren Anderton, Nick Barmby and Ille Dumitrescu. I’ve recently read Anderton’s autobiography and he states that Ardiles did absolutely no defensive work whatsoever in training; outrageous tactics in the modern game. Spurs got off to a great start, leading 2-0 at half time though goals from Sheringham and Anderton. Wednesday hit back to make it 2-2 just after the break from Dan Petrescu and a Calderwood own goal. Barmby restored Tottenham’s lead before the big moment happened. A cross from the right was headed home emphatically by Klinsmann. The German was aware of his diving reputation in England and decided to make fun of the situation by doing a celebratory dive with all his teammates, a very amusing sight. It was a genius move by Klinsmann, who with that instantly got the English public and press onside. Proving that Germans do have a sense of humour. Klinsmann scored 30 goals that season and won Football Writers Player Of The Year, but more importantly he won a place forever in the hearts of Spurs fans and English crowds around the country.

The quote that Match Of The Day pundit Alan Hansen is remembered for the most is, ‘You can’t win anything with kids!’ This came on MOTD on the Saturday evening after Man Utd had lost convincingly to an Aston Villa side who had narrowly avoided relegation the season before. The summer of 1995 had seen the departures of 3 key United players in Mark Hughes, Paul Ince and Andrei Kanchelskis. Instead of buying big to replace them, Alex Ferguson had decided to put his faith in a handful of players who had come through the youth system; Gary and Phil Neville, David Beckham, Paul Scholes and Nicky Butt. They we’re collectively known as the ‘Class Of 92’, after famously winning the FA Youth Cup in style a three years earlier. Many were agreeing with Hansen following this defeat on the opening day, especially when Villa went 3-0 up after only half an hour with goals from Mark Draper, Ian Taylor and a Dwight Yorke penalty. United steadied the ship after half time and were rewarded with a consolation goal from Beckham. However this was the lowest point all season for the Red Devil’s, as they went on to win the league from under the noses of runaway leaders Newcastle United, and made it a double when they beat Liverpool in the FA Cup final. This year ended up being just the start for young ‘kids’, winning a further 5 league titles together and a memorable European Cup final in 1999 before some eventually moved on. Alex Ferguson 1-0 Alan Hansen.

Just a year after that calamity at Villa Park, Man Utd we’re starting the defence of their league title at Selhurst Park against Wimbledon. It was a comfortable victory for the champions and many forget the other two goal scorers in this game (Cantona & Irwin), as it was severely overshadowed by a goal from Mr David Beckham. A strike that we had never seen the likes of before, Beckham managed to score from just inside his own half, spotting keeper Neil Sullivan off his line. It was a goal that catapulted the future England captain into the limelight. A mega deal with Adidas followed and a new Spice Girl girlfriend soon arrived. New England manager Glenn Hoddle immediately called Beckham up to the national squad, where he stayed for 13 years. Where his first full season the year before had given him a breakthrough to the United side, the 1996/97 season gave him a pedestal on which he remained until his retirement. That goal was definitely worth a try, Becks!

On the same day as Beckham was announcing himself on the world stage, 250 miles up the A1, an already established world star was announcing himself on the Premier League stage. Fabrizio Ravenelli had signed in the summer for Middlesbrough for a club record 7m fee, joining 4 million pound new signing Emerson, Brazilian starlet Juninho and England international Nick Barmby. These were exciting times at the Riverside Stadium, where chairman Steve Gibson was splashing his cash, aiming for European football. Their opening match of the season with Liverpool was a cracker. Stig Inge Bjornebye opened the scoring early for the Merseysiders, cancelled out soon after by a first goal for Ravenelli from the penalty spot. The ever widening John Barnes put his side back in front on the half hour mark, but the Italian hitman equalised again before half time. In the second half Robbie Fowler looked to have given Liverpool the three points, but man of the hour Fabrizio Ravenelli completes his hat-trick with 10 mins to go to give Boro a share of the spoils. With 3 goals in his first match, he looked like the signing of the season for Bryan Robson’s men. But despite his 31 goals in all competitions and 2 Cup final appearances, Middlesbrough were relegated from the Premier League at the end of that season. Ravenelli went on strike in the summer and duly moved to Marseille at the beginning of the following campaign. Rumour has it that when Boro were first trying to sign the Italian, Robson showed him around London instead of the North East, claiming to be close to the capital. I would love to have been a fly on the wall when the raging Ravenelli figured out that was a lie. 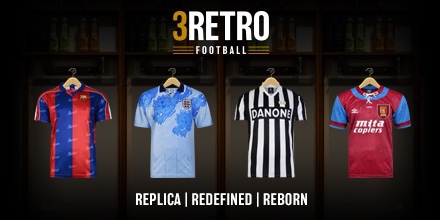